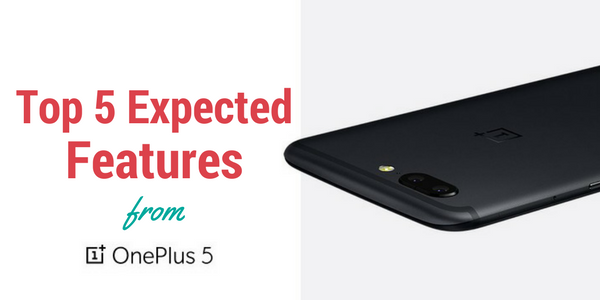 The OnePlus is all set to announce their latest flagship device in a week time from now, but we already seem to know everything there is to know about the device. The rumor mill really outdid OnePlus 5 as well like the Samsung S8. It left no stone unturned and leaked everything about OnePlus’s next devices.

So we thought that it’ll be a good idea to highlight top 5 of the most notable features that are expected from OnePlus 5.

To keep up the modern trend OnePlus 5 is also expected to feature a dual-camera setup on the back, like Huawei P10, LG G6, iPhone 7 Plus and many other devices.

OnePlus has recent revealed that it had teamed up with DxO to enhance the photography experience on their device.

The official teasers also suggest that the company is much more concerned in OnePlus 5 camera. Looks like OnePlus 5 camera will be one of the most highlighting factor of the device.

Rumor mills and leaked images suggest that OnePlus 5 could be an iPhone 7 Plus clone in terms of design as per the aligned OnePlus 5 press render image.

As per the press render of OnePlus 5 design appears to be identical, bar the company logo on the back, with the dual and front camera placements, flash which highly resembles iPhone 7 Plus. However, press renders don’t always represent the look and feel in the hand, so we can expect some little twinkles from OnePlus 3T design.

This time we’re expected to get two variants. The device will offer 6 GB of RAM and 64 GB of storage. However, we just might see another version with 8 GB of RAM and 124 GB of space. There are also rumors going around that OnePlus will offer upgraded storage variants 6 GB RAM and 128 GB storage and 8 GB RAM and 256 GB of ROM.

Unsurprisingly, the OnePlus 5 will also be powered by the Snapdragon 835. The Snapdragon 835 will set the foundation smooth, powerful, and efficient performance. With graphically demanding apps, for example, you’ll notice how fast they load and how well they run.

The company has been increasing prices with each new model. The OnePlus One priced at $299, its successor started at $329, while the OnePlus 3 was retailed for $399 and the current flagship, OnePlus 3T priced at $439.

We will learn everything about the OnePlus 5 on June 20, 2017, when OnePlus unveils the device.

Am the Chief Editor & Founder of Logixsnag. My love story with gadgets started in 2007 and highly addict to know new technologies. Always trying to figure out something new around the gadgets.

How to Add iOS 14 Widgets on iPhone